Severe storms affected the Hunter region but most storms of more significant severity producing large hail were near the Karuah to Bulahdelah region. Hailstones to 3cm were widespread along this path perhaps larger in the main core as these hailstones were falling predoinantly ahead of the main core in the anvil region. A severe storm events on Monday 23rd February exhibited classic supercell structure with very definite hailstones! The structure did not last for long before it went into a slow decline. Nevertheless although Sydney area did not have any storms predicted storms did develop further west. Twice the storm tried to organise before basically sending up an impressive explosive updraft and organising rapidly.

Several storms were reported with storms rapidly developing near 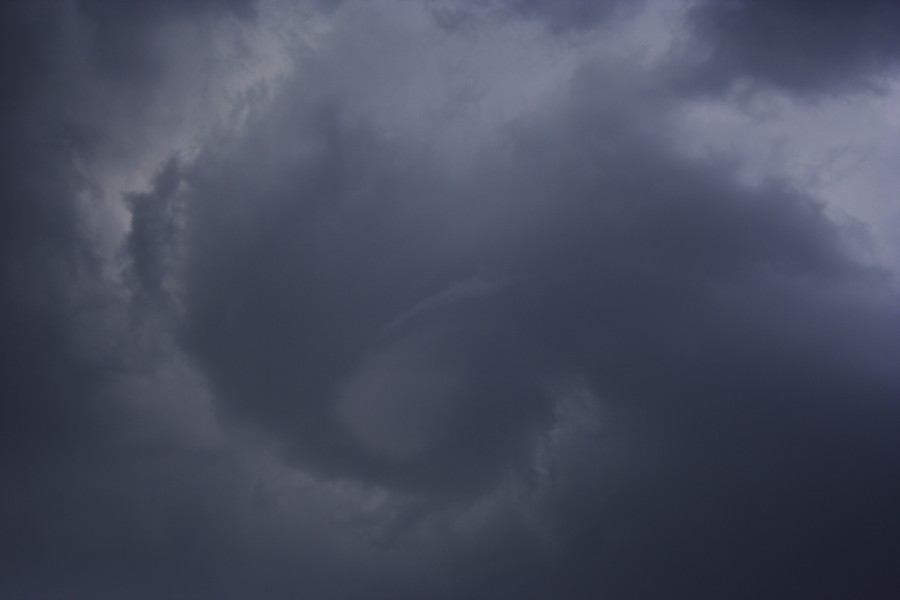 Lithgow initially and also east of Mudgee a little later. There were likely two supercells out of this region. The Lithgow cell had an interesting base – this nice image of a base circulation and dimple of a funnel almost overhead. This coincided with a wind change in the near storm environmental boundary.

Hailstorms Lithgow to near Lake Macquarie. The storm that approached Lake Macquarie was a fast moving storm and dumped hailstones to a diameter measured at 4cm. It most likely was an elevated supercell and was interesting to watch as it altered its local environment suddenly clearing the low cloud as it raced across.

Another sharp right moving storm approached Lithgow from near Mudgee and produced hail damage in Lithgow! Severe storms developed over the Putty region exploding to another level regardless of the weaker wind shear. Despite the warmer atmosphere, large hail was observed with microbursts near Jerrys Plains. High CAPE dominated on this day and although wind shear was relatively weak, the supercell attained excellent structure with deep layer inflow. A nice beaver tail observed for some time before the storm became outflow dominant. Lightning activity was incredible with a few sparkes on power lines observed. Large hailstones to 3cm were observed. Several supercells developed on this day with hook echo featuring on at least 4 of these supercells – never experienced on any Australian radar to this date! Very large hail was observed smashing windshields in the Portland region.